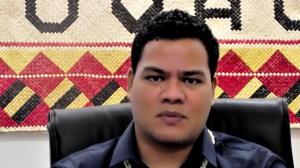 This morning, Hon. Minister Simon Kofe delivered remarks along with Leaders and Senior Officials from Kiribati and the Marshall Islands as part of the Virtual Peacebuilding Fund (PBF) Donor “Visit” and Meeting on Climate Security in the Pacific! The United Nations PBF is a multi-year standing trust fund for post-conflict peacebuilding, established in 2006 by the UN Secretary General at the request of the UN General Assembly with an initial funding target of $250 million! The fund was established out of the recognition that among the impediments to successful peacebuilding is the scarcity of resources, most notably financial resources! The PBF Climate Security Project focuses on enhancing climate security in Tuvalu, Kiribati, and the Marshall Islands by enabling greater and more inclusive understandings and support for climate security worldwide! The Ministry thanks the UN Resident Coordinator Office in Suva for the opportunity to engage with donors and share views on the importance of PBF projects!